History of the Catholic Schools of Fairbanks (ICS and Monroe) 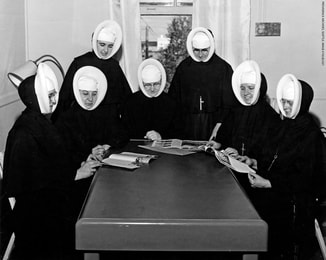 The Catholic Schools of Fairbanks (CSF) is located a few blocks inland after crossing the Chena River from the heart of downtown Fairbanks. It is tucked into one of Fairbanks' oldest residential neighborhoods and adjoins industrial and business areas. CSF has been an integral part of the Fairbanks community for over seventy years, but our story really began well over
100 years ago — long before Alaska even existed as a state — with a Jesuit priest.

We started in the basement of a Church
In 1902, gold was discovered in the Tanana Valley, and the rush to the interior of Alaska began. Fr. Francis Monroe, SJ had been in Alaska since 1893 spending time in Holy Cross Mission, Nulato, and Eagle. He left Eagle, arrived in Fairbanks on June 21, 1904, and immediately decided to build a Catholic Church on the south bank of the Chena River. On November 1, 1904, Immaculate Conception Church was opened for public service.
In 1906, Fr. Monroe built St. Joseph’s hospital (Denali State Bank in present day) on the north bank of the Chena River, a little downstream from the church. But in 1911, after spending a number of years going back and forth between the church and the hospital, Fr. Monroe decided to move the church. Literally. He waited for the Chena River to freeze, then — using logs as rollers — winched the church across the river and up the bank to its current site in late November 1911. Fr. Monroe became known as “the Alaskan Hercules.”
By 1945, Fairbanks had grown considerably with one military facility, Ladd Air Force Base (now Ft. Wainwright), adjacent to the town and another, Eielson Air Force Base, 22 miles south of town. The Catholic community asked the Sisters of Providence (who staffed the hospital) and the Society of Jesus (who staffed Immaculate Conception Church) to partner and open a school
in the basement of the Church. On September 3, 1946, 36 children were enrolled in kindergarten through 4th grade. Enrollment jumped to 104 students the next year. 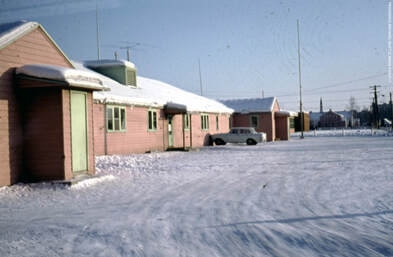 The school moved to Slaterville
In the spring of 1950, a tract of land was purchased in Slaterville, a neighborhood slightly north of the Church. Barracks were moved to the site, and Immaculate Conception School opened on the new site in 1951 with eight grades.
In 1956, ten freshmen began high school in the basement of Immaculate Conception Church while a high school was being built on the same property as the elementary school. Monroe High School, under the administration of the Society of Jesus, was dedicated in September 1956. The partnership between the Jesuits and the Sisters of Providence continued, and the Jesuit Volunteer Corps began sending young people to teach at ICS and Monroe in the early 1960s. A second wing was added to Monroe in 1960 as the school grew, and in 1965-66, the gymnasium Boileau Hall (named after George Boileau, SJ) was built with many Jesuit Brothers assisting on the project.
During the August flood of 1967, three feet of water flooded the gym; consequently, the entire floor was taken out piece by piece, dried in the parking lot, and then relaid with the assistance of Jesuit Brothers.

Monroe Foundation, Inc. was created to raise funds for the schools
Monroe Foundation, Inc. (see Appendix B) was organized in the early 1970s with the mission of raising funds for the Catholic Schools. By the mid-1970s, it was apparent that the old barracks which housed ICS needed to be replaced, and the current two-story school was opened for the 1979-1980 school year.
However, even while the schools were growing, the Sisters of Providence and the Jesuit Fathers were leaving. Jesuit Volunteers stayed throughout the 1970s, and Sinsinawa Dominicans and other religious orders provided teachers. By the 1980s, there was a transition to a predominantly lay faculty in both schools, and maintaining the Jesuit mission of the schools was a challenge. Although the Diocese of Fairbanks was led by a Jesuit Bishop until 2000, this was not the same powerful presence as having Jesuit priests as teachers and administrators within school.
During the 1980s and 1990s, Fr. McGuigan, SJ guided Monroe Foundation, Inc., and his office was located at the school. Having served previously as principal, teacher, and coach, Fr. McGuigan called upon many of his past students and their families to support the schools in his time as the President of the Foundation.

A Chapel was built
In 1998, it was apparent that the last section of the barracks which had been moved to the site in 1951 needed to be taken down. Bishop Kaniecki, head of the Diocese, also envisioned the addition of a chapel as the center of the two schools. Along with Monroe Foundation, Inc., he ambitiously launched a $4 million building campaign. Construction began in the summer of 1999 and was completed in March of 2000, which included a new chapel, school office, library, computer room, and commons area. Holy Family Chapel was consecrated in April of 2000. Fr. McGuigan, SJ was able to attend the Mass; he died two months later. 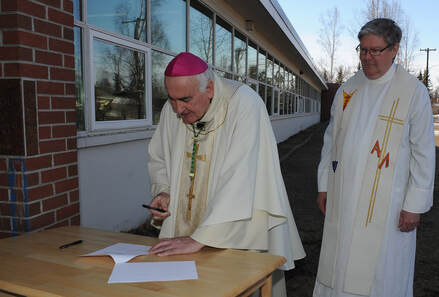 We reconnected with our Jesuit roots
From 1962-2000, Jesuit Bishops Gleeson, Whelan and Kaniecki led the Diocese of Fairbanks until Bishop Kaniecki died unexpectedly in August of 2000. At around the same time, the Jesuits left Immaculate Conception Church, and the Jesuit charism of Fairbanks was slipping away. The schools still had Fr. Normand Pepin, SJ who taught math, French, and religion at Monroe in the 1970s and then returned in the 1980s. After many years of service, he finally retired in 2010.
The Diocese of Fairbanks and the Oregon Province of Jesuits were each dealing with issues of clergy sexual abuse and bankruptcy in the 2008-2012 time frame. The Catholic Schools of Fairbanks was experiencing a decline in enrollment and financial challenges. In many ways, ICS and Monroe were the shining light of Jesuit history in the Diocese. Without any Jesuit presence in the Fairbanks area, animating the mission consistently throughout the schools was challenging. We needed direction, a “way of proceeding,” and reconnection with the Society would provide this.
In the midst of bankruptcy, the Board of Directors approached Bishop Kettler with the idea of reconnecting with the Society of Jesus for the strength of their pedagogy and commitment to education.
Bishop Kettler agreed, and the first steps were taken toward a new partnership. A thoughtful process began with the Provincial Associate of Secondary Education, the Presidents and Principals of the Oregon Province, and with Fr. Pat Lee, SJ, the Provincial. Our partnership, "Endorsement of the Oregon Province of the Society of Jesus," became official on May 9, 2013, with documents signed by Bishop Donald Kettler, Fr. Pat Lee, and Board Chair Scott Oravec. The administration of the Catholic Schools of Fairbanks now faced the challenge of thoughtfully reigniting the Jesuit charism within the faculty, staff, students and families of ICS and Monroe while continuing to animate the mission of our schools.